First new album in 5-years “Look Out!” to be released 24th September 2021 via Gearbox Records 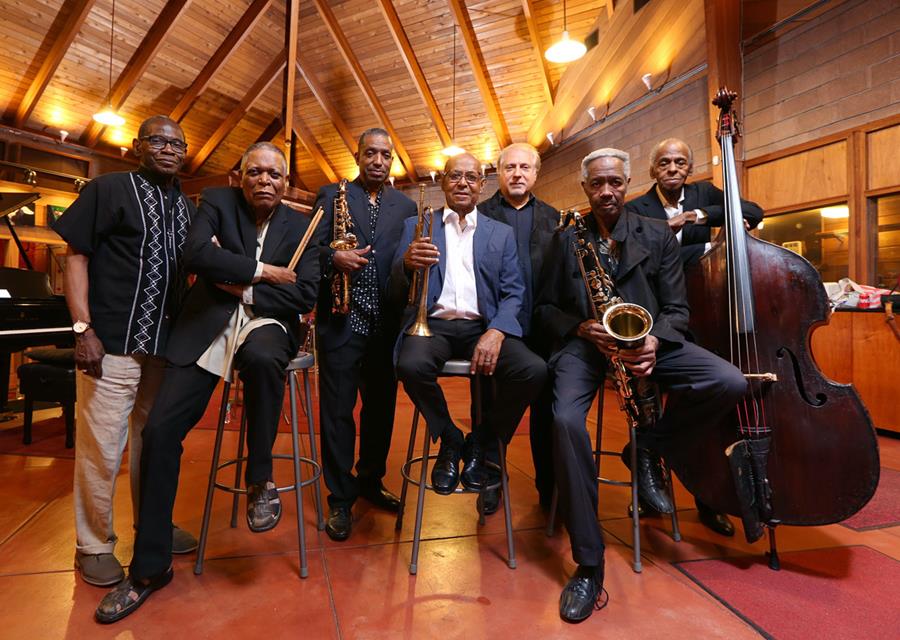 Select press for The Cookers:

“Individually, they’ve been at the core of the post-bop jazz scene for decades. As a group, they’ve been thrilling audiences around the world for the past 5 years.” – NPR

“This really is the best working band anywhere at the moment… This record [Time And Time Again] is what jazz should always be about.” – Jazzwise

“Each successive Cookers disc is increasingly fiery and forward-reaching.” – Downbeat

Today, jazz supergroup The Cookers have shared a new single from their highly anticipated forthcoming album “Look Out!” – out 24th September 2021 via London tastemaker label and analogue specialists, Gearbox Records.

The new single “Traveling Lady” is the second single to be taken from the album, which is also their first full-length release in 5-years. The track also comes on the heels of the news that two of the band’s members (Billy Hart and Donald Harrison Jr.) are to be honored for their lifetime contributions to jazz in the 40th anniversary of the National Endowment For The Arts as their 2022 Jazz Masters.

Recorded at legendary engineer Rudy Van Gelder’s studio at Englewood Cliffs, the new vinyl will have each of the members signatures inscribed into side D, and also features liner notes by award-winning music critic Kevin Le Gendre.

Experience counts, especially in jazz. The more time musicians spend interpreting tunes and interacting with others, the more articulation an audience can expect. This exciting all-star septet summons up an aggressive mid ‘60s spirit with a potent collection of expansive post-bop originals marked by all the requisite killer instincts and pyrotechnic playing expected of some of the heaviest hitters on the scene today.

Whereas the majority of the jazz tradition’s elder statesmen head their own groups, this is one of the few jazz bands to contain legacy musicians of this calibre functioning as an equitable, long-standing ensemble. Some members of The Cookers are now in their seventies and playing with a vigor and wisdom that flow from a lifetime’s dedication to music. Every chorus, every unison statement, every solo, every moment of call and response, vividly reflects the immense talent of the musicians, and, perhaps most significantly, the cohesion of their personalities.

Billy Harper, Cecil McBee, George Cables, Eddie Henderson, and Billy Hart all came up in the heady era of the mid ‘60s. It was a period that found the dimensions of hard bop morphing from their original designs, and each of these guys helped facilitate the process as members of some of the most important bands of the era. Hart and Henderson were members of Herbie Hancock’s groundbreaking Mwandishi group; Cecil McBee anchored Charles Lloyd’s great ’60s quartet alongside Keith Jarrett and Jack DeJohnette; Billy Harper was part of Lee Morgan’s last group, as well as being a member of Max Roach’s Quartet and Art Blakey and the Jazz Messengers; while George Cables held down the piano chair in numerous bands including groups led by Sonny Rollins, Joe Henderson, Freddie Hubbard, Dexter Gordon and Art Pepper.

David Weiss and Donald Harrison Jr., from a more recent generation and the youngest members of the band, are experts in this forthright lingo, having gained experience performing with Art Blakey, Bobby Hutcherson, Freddie Hubbard, Charles Tolliver, Roy Haynes and Herbie Hancock.
,
More importantly, all the members of The Cookers are leaders in their own right and have recorded for touchstone labels such as Strata-East, Contemporary and India Navigation. Once carried by history The Cookers have become carriers of history. But it’s the unmistakable power of teamwork that makes this music so commanding and resonates with a kind of depth and beauty that speaks of the seasoned track record of its principals (combined, the group has over 250 years of experience in the jazz world and has been a part of over 1,000 recordings).

“Look Out!”, which is the band’s sixth album since its 2010 debut Warriors, marks an unstoppable march forward. The seven pieces on offer are songs that have been previously recorded and highlight the ability of each bandmember-composer to create themes that are worthy of reinvestigation, a major aspect of the jazz aesthetic.

In every song there is a consummate handling of the many source materials that have made African-American music such a revolutionary, life-enhancing force for over a century, from the yearning cry of the blues to the righteous roar of gospel to the balanced rhythmic tension of swing and the boisterous, bulky backbeat of funk.

The new single “Traveling Lady” is a title by pianist George Cables that previously appeared on a HighNote album called The George Cables Songbook. The new version was premiered earlier this week by WBGO, who described it as a “hard-bop rumination in waltz time”, going on to say “it features a series of estimable solos (Henderson, Harrison, Cables) driven by a ceaseless vigilance in the rhythm section (especially Hart). Don’t miss the deft ensemble arranging that leads back to the melody. “

Elsewhere on the record, titles by bassist Cecil McBee [Mutima, Cat’s Out Of The Bag] , tenor saxophonist Billy Harper [Somalia] and pianist George Cables [The Mystery Of Monifa Brown, AKA Reggie] underline the strength of the composers in the band, and this emphasis on an original repertoire defines The Cookers as a group that that is able to create its own book of standards.

After over 14 years together, again the incredibly high level of musicianship has only increased with the revisiting of their fresh, challenging, boundary-pushing music from these legendary, revered, veteran improvisers.

“Look Out!” is out 24th September via Gearbox Records – Pre-order HERE