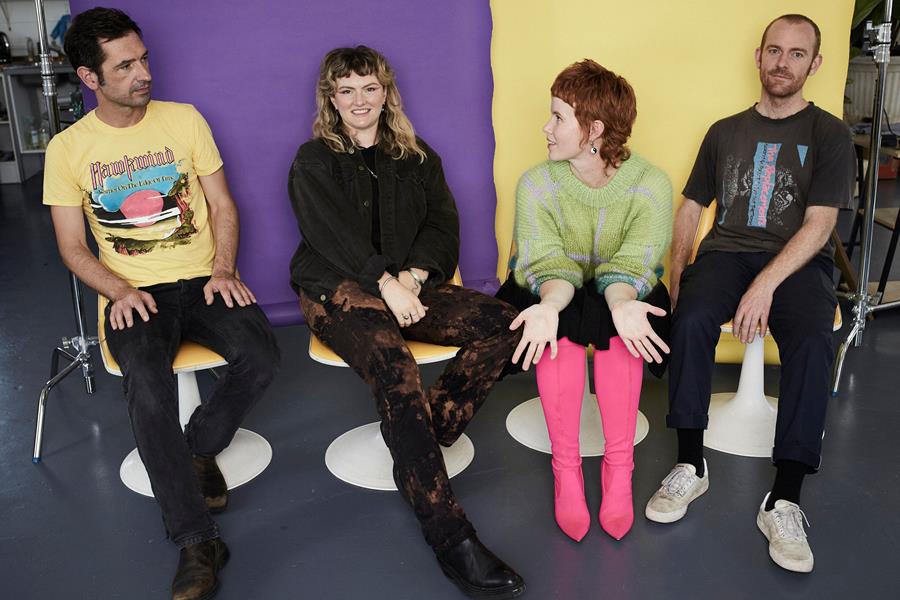 “it’s the way that [Anna] Langdon delivers them, in her Mark E Smith, deadpan, disinterested, eye-rolling tone that binds the themes of the song together so well.” – Euphoria

“It’s sharp, clean, and doesn’t have any pretensions of itself. ‘Social Graces’ is a really solid piece of music from a solid set of musicians.” – So Young

“…full of swaggering post-punk anthems, the band themselves describe it as a “moody critique of the absurd”, juxtaposing emotional subject matter with off-the-wall imagery.” – DIY

“The track’s staunch rhythm is layered with an infectious groove that truly shows off the band’s creative flair.” – The Line Of Best Fit

“Their new single Social Graces is inspired by the awkward post-lockdown era of trying to remember how to interact as humans again, which manifests as a tightly wound ball of post-punk tinged nervous energy.” – Stylist

Loose Fit share new single ‘Stupid Drama’ ahead of their debut album out at the end of the month. It also includes previous singles ‘Exhale’ and the title track. Social Graces is out 29th April 2022 via FatCat Records. Pre-order now.

‘Stupid Drama’ has a repetitive minimal funk thing going on, reminiscent of Use No Hooks and Pylon, but the vocals are sharp, dry and fiery, sometimes eroding into an acerbic Sleaford Mods style bored and anguished drawl. It’s a bratty, snotty, foot-stomping, sax-screeching romp through the types of absurd, mundane predicaments that sometimes grow so big they seem to generate their own gravitational fields.

On the single singer Anna Langdon says, “I always feel like I’m gasping for air in this song, which fits well with the theme of being completely fed-up and trying to laugh about it.” 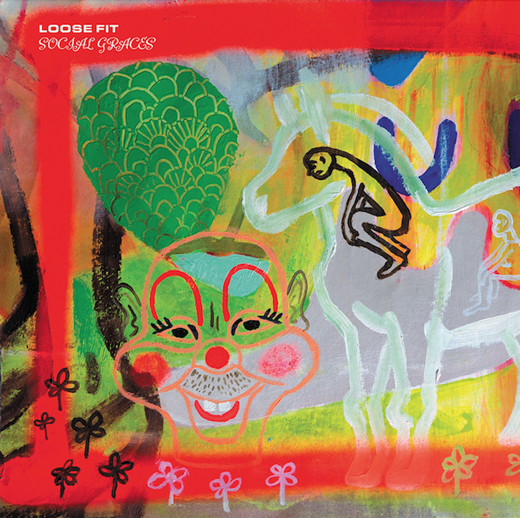 Made up of Kaylene Milner, Anna Langdon, Max Edgar, and Richard Martin, Kaylene and Anna met in fashion school and instantly bonded through their love of experimental music. After toying with low-fi bedroom recordings, the pair recruited Max Edgar on guitar and Richard Martin on bass and started making some actual noise. With Kaylene behind the kit and Anna on sax and vocal duties, Loose Fit’s unique and focussed sound began to take shape. Kaylene is also behind cult knitwear brand WAH-WAH Australia with items worn by Noel Fielding, Karen O, The Linda Lindas, and even Kim Gordon.

The band’s rhythm-heavy sound contains echoes of UK post-punk titans such as Public Image Ltd, Maximum Joy and A Certain Ratio. They’re also fans of the US No Wave scene, especially the paint-stripper guitar of James Chance and the pop exuberance of Bush Tetras. Other pop/art heroes are Talking Heads and the B-52’s, while contemporary inspirations include range from the dubbed out explorations of Anika and Exploded View to the rhythmic minimalism of The Native Cats and Sleaford Mods.. Closer to home Loose Fit are enthusiastic devotees of their local music scene, gladly sharing stages with favourites like Exek, Tropical Fuck Storm, Party Dozen, Pinch Points, and Negative Gears.

They take cues from some of the more adventurous groups from the 70s/80s post-punk and No Wave scenes that eschewed the blueprint and started looking to funk, dub and elsewhere for inspiration. On top of these foundational grooves lay guitar lines that alternate between scratchy and screechy, punctuated by Anna’s catchy vocal hooks and intermittent sax skronk.

Building on the success of their self-titled EP, the album expands the Loose Fit sound-world to include a dub-influenced march through social media bleakness, ACR-style exercises in rhythm and tension, and an atmospheric coda featuring eerie trumpet from drummer Kaylene Milner.

“I think the album is a truthful document of a weird time. Covid-era has sucked (of course), but did give us time to explore new sounds and ways of working. It was a shit time to be a band, but it was great to have a vessel to channel all our anxieties and pent-up energy into. I think the album has all that fucked-up 2020/2021 energy in it.”, Bassist Richard Martin says.

Tracks on debut album Social Graces were written between 2019 and 2021, and the full recording was close to finished in December 2019 with only a few tweaks required in early 2020. However, when the pandemic hit they were forced to press pause, and although this was initially a bummer, it did give them time to rethink the album. They improved some songs, and scrapped others in favour of writing new and better ones during 2020 resulting in a stronger album thanks to all those lockdowns.

“I guess with our EP we were stoked just to be a functioning band – for the album we’ve tried to keep the energy and spontaneity of those first recordings, but introduce some more complex musical ideas.” says Kaylene

Guitarist Max adds, “We always write in a very collaborative, spontaneous way. Usually when we turn up at practice we’ll just start playing and a seed of something will form without us knowing what we’re doing. Often it’s rubbish and we’ll get bored and move on to the next thing, but if it sounds like a keeper then it’s just a process of going over and over it until it sort of resembles a song.”

Anna is behind the album’s unique artwork, “It was a painting I would return to and try to resolve throughout 2020, but it turned into a collection of doodles. It never was fully resolved, it’s just the strange vibrant ramblings of my subconscious during 2020, like the scribbles in a notepad you have by your phone. It does have a few references to things I was thinking about when writing the lyrics though. The band really liked it so now it’s the album cover.”

There will be 3 versions of the vinyl – standard black, a green vinyl only available through the FatCat webstore/Bandcamp, and a Rough Trade exclusive limited to 100 with a hand printed sleeve made by Anna who is behind the album artwork.

Duresta: A Beginner's Guide to the Perfect Sofa