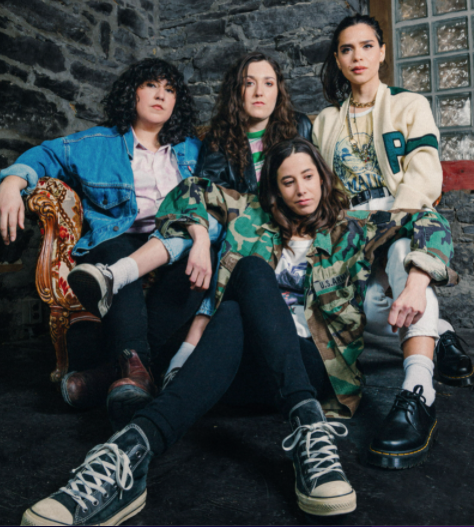 “Explosive and full of attitude, this record feels timeless.” – UPSET ?????

“Big like ’70s radio hits, dirty like garage rock, and driven like ’90s punk…the kind of shit you want on in the background as you walk into the bar dressed to kill.” – Kerrang! Magazine

“Live Your Truth Shred Some Gnar is about needing to believe in something. For us, that’s ourselves. Believing that we can and will do it,” bassist/vocalist Kathryn McCaughey encourages. “You have to live your truth and cannot lose sight of who you are. Even when you feel like a loser cleaning puke out of the bathroom sink, or because of rejection, heartache, and a seemingly never-ending list of reasons to give up. You have to shred some gnar because you are the only person who gets to live your own life.”

Buy / Listen to Live Your Truth Shred Some Gnar HERE

McCaughey adds about their brand new track, “EAT. SLAY. CHARDONNAY. This song was originally 1:14 since we wanted something fast and punchy. We cut out all the bullshit and went right to the point, all while raising a toast to yourself.”

Originally formed by bassist/vocalist Kathryn McCaughey, the quartet that also includes guitarist Karolane Carbonneau, drummer Sarah Dion and keyboardist/percussionist Lisandre Bourdages has been winning fans since their breakout performance at the 2017 WayHome Festival and subsequent tours with FIDLAR, PUP, Alexisonfire and The Distillers.

Call them punk rock if you like, but its long-held perceptions are just some of the things NOBRO are here to challenge—in the loudest and most exciting way possible. 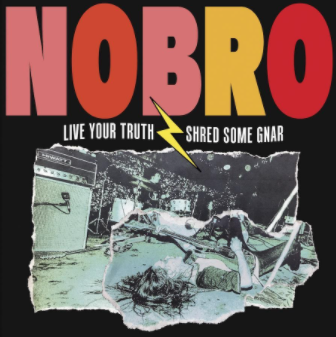 “I spent my whole life running away; I think I like it better that way.” Those lyrics form the basis of ‘Better Each Day’, the opening track on NOBRO’s new EP Live Your Truth Shred Some Gnar, seven of the most searing examples of scorched earth rock and roll ever committed to tape by a Canadian band.

In fact, bassist/vocalist Kathryn McCaughey founded the band almost as a challenge to herself when the aftermath of a relationship with a prominent Montreal musician made her determined to be “more than just a footnote on this person’s Wikipedia page.” She realised she possessed all the tools to express herself in her own voice and to shape her own destiny. All that was needed were fellow musicians who felt the same.

“It all started out of anger, resentment and revenge,” McCaughey now says with a laugh. Once finding drummer Sarah Dion, the search shifted to enlisting a female guitarist. “That was actually extremely difficult. After the word got out that I was looking for someone, I started getting guys coming to me saying, ‘I’m going to play guitar in your band,’ and my immediate response was, ‘No, bro.’”

Ultimately, McCaughey partnered with guitarist Karolane Carbonneau, and keyboardist/percussionist Lisandre Bourdages rounding out the line-up, NOBRO made an immediate impact on the Montreal scene with their debut independent 7-inch in 2016. With that, the band soon caught the attention of Dine Alone Records and landed their first major appearance as part of the 2017 WayHome Festival. They hit the road hard afterward, touring the U.S. with FIDLAR and touring Canada with PUP, Alexisonfire and The Distillers. In 2020, NOBRO finally released its first EP with Dine Alone, Sick Hustle, which Exclaim! described as, “filled with enough excellent shredding to sell even the toughest punk snob on this band.”

If that couldn’t convince them, Live Your Truth Shred Some Gnar surely will. Although McCaughey would like to say that the band took a more measured recording approach compared to how they laid down Sick Hustle – “we slammed all the content together and vomited it out,” is how she puts it – she admits the process was essentially the same. Fortunately, producer Thomas D’Arcy (July Talk, The Sheepdogs, Yukon Blonde) had a grasp on what was needed after working on Sick Hustle, and was able to flesh out some of the demos for songs like ‘Julia’ and ‘Get With U’. From there, it was just a matter of once again harnessing NOBRO’s raw power.

Although ‘Better Each Day’ seemed a natural choice to be the first single from Live Your Truth Shred Some Gnar, other songs such as the Ramones-esque ‘Eat Slay Chardonnay’ offered some stiff competition. “That one came out of a day in the suburbs,” McCaughey explains. “I was having a bad time, so Sarah and Lisandre said we should get together at Sarah’s parents’ house and just have an afternoon to ourselves. Sarah’s mom made cocktails and we hung out by the pool. Someone took a picture of me wearing a huge old lady visor and I captioned it ‘Eat Slay Chardonnay.’ That was all it really took to write that song.”

Another standout is the sludgy ‘Not Myself’, written in collaboration with Terra Lightfoot. “We were all hanging out in Thom’s studio one day and Terra started playing this riff. I made up some lyrics, and was like, I don’t know about this. But Terra is so encouraging and positive that she kept saying, just go for it. We managed to piece it all together, and I actually give her full credit for that one. If you’re ever in trouble, Terra should have her own hotline. She’s such a great person.”

The easy-going atmosphere in the studio reached its peak on the EP’s final track, ‘Life Is A Voyage’, a mainly acoustic-based jam recorded live off the floor right after the band took magic mushrooms. “We tried to get it on tape before things kicked in,” McCaughey laughs. “That was going to be one of the mysteries with this record, ‘Which one is the mushroom song?’”

Hearing tidbits such as these should warm the hearts of any die-hard rock and roll fan who may be lamenting that the music has lost its sense of danger. To the contrary, NOBRO is a band that’s re-writing the script and is poised to make a lasting statement with Live Your Truth Shred Some Gnar, something McCaughey is finally willing to embrace.

“When we first started out, I had no idea we would get this far,” she says. “Every step along the way has surpassed my expectations. I really hope there are more great things ahead in the future, but at the same time I’m acutely aware that I don’t have a clue what that’s going to be like. The best part about it is that, as a band, we’re all fully committed to what we’re doing, and we’re ready to prove that once we’re able to get back on the road.”