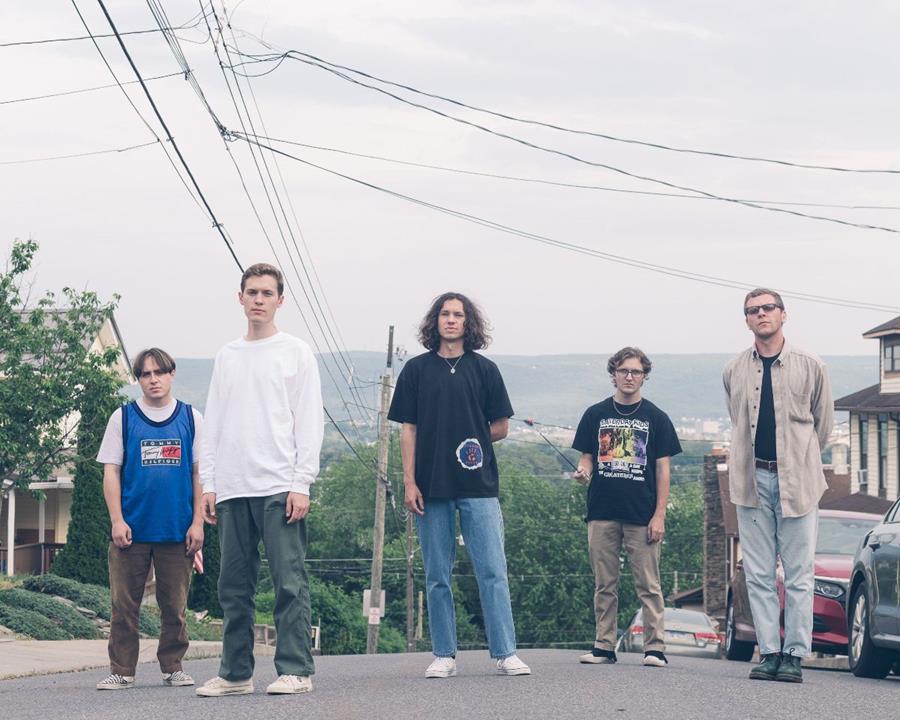 Praise for One Step Closer and This Place You Know:

“An album that is everything hardcore should be in 2021” – Upset

“…One Step Closer channel their anger and distress into fiercely intense blasts of aggression. This is music for purging your soul, bludgeoning your enemies, and lashing out at all the world’s injustice…”
– Stereogum (Best Albums of 2021)

“Now is the perfect time for you to become obsessed with this very special band.” – Rock Sound

One Step Closer recently released their debut full-length, This Place You Know, on Run For Cover Records, and the Wilkes Barre, PA hardcore upstarts are showing no signs of slowing down. Tomorrow the band are embarking on their latest extensive run of tour dates and to mark the occasion they’ve shared their new music video for “Time Spent, Too Long.”

On This Place You Know, One Step Closer have honed their anthemic style of hardcore to create their most compelling set of songs to date. The album’s urgent and ambitious sound has garnered attention from the likes of Stereogum, Revolver Magazine, The FADER, BrooklynVegan, NPR, SPIN, Bandcamp Daily, FLOOD Magazine, and more, and furthers the young band’s reputation for standing out from the pack. “Time Spent, Too Long” highlights their ability to be melodic and cutting all at once, and the song’s new music video captures the emotional core at the heart of One Step Closer‘s music.

Listen to This Place You Know:
https://lnk.to/thisplaceyouknow

Purchase This Place You Know:
https://lnk.to/thisplaceyouknow

“We decided to make the video based around a younger kid who is just struggling with life and trying to find some purpose. Since it’s a short song, the goal was to make a simple story that you can follow with nice articulated shots that keep it interesting. It makes it feel more like a movie than a music video, which makes it even cooler. This is our first professionally shot music video and I’m super hyped on how it turned out.”

The video’s director, Jake Elko, added:
“For the video production of Time Spent, Too Long, I wanted to capture the feeling of loneliness that relates to so many of us growing up in Wilkes Barre while showing off some of the hidden beauty surrounding the city. Working within an extremely short timeframe, Kyle and I worked together alongside Dante and the band on different sets creating unique visuals with modern film techniques. We were really excited to incorporate FPV drones into our workflow which allowed us to push the limits of our vision.”

This Place You Know was born out of a period of transition and upheaval for the members of One Step Closer (vocalist Ryan Savitski, guitarist Grady Allen, drummer Tommy Norton, bassist Brian Talipan, and guitarist Ross Thompson). The album interrogates the notion of home with Savitski’s lyrics exploring what happens when the things that grounded you suddenly change or cease to be there. The loss of family, dissolving relationships, and the mental toll of a dark period informs the record’s ten tracks of towering guitars and pummeling drums, with moments of soaring melody breaking through like a hope for better things on the horizon. It’s a powerful statement intent from one of the most exciting new bands in aggressive music.

One Step Closer have been touring tirelessly since the release of This Place You Know. This week they’re starting a run of US West Coast dates that includes shows with Modern Color, Dare, Movements, and in January next year the band will head out on a series of EU / UK dates alongside Magnitude – dates below.

This Place You Know out now from Run For Cover Records.

“This place you know, sometimes it hides the truth and it lets people go.”

One Step Closer vocalist Ryan Savitski cries out this declaration just over halfway through the opening track on the band’s debut full-length, the aptly titled This Place You Know. Home can be a comforting place, a safe grounding that you can always return to; but when you begin to lose the real and metaphorical things that tie it together, the concept of home can become more complicated. This crossroads is where One Step Closer find themselves on This Place You Know, a record about grasping both the known and unknown, and the band’s most profound and captivating work to date.

In just five short years, One Step Closer have become a modern hardcore mainstay. One Step Closer formed in 2016 in Wilkes-Barre, Pennsylvania, with Savitski and his bandmates — currently guitarist Grady Allen, drummer Tommy Norton, bassist Brian Talipan, and guitarist Ross Thompson – revering the unusually melancholic, forward-thinking youth crew hardcore acts of both the genre’s classic era and ones later into the mid-2000’s. The quintet soon dropped a raw demo, then made a splash with a self-titled EP in 2017 and gathered buzz amid regional touring. But it was 2019’s From Me to You that truly took the contemporary hardcore world by storm. The fiery EP countered existing trends in exchange for a more melodic sound, essentially completing the band’s progression from scrappy, growling youth crew act to a well-rounded, heartstring-tugging emotional hardcore powerhouse — an evolution not unlike that of their beloved genre ancestors, Turning Point. It was the type of dramatic-yet-aggressive hardcore largely not heard in over a decade: musically heavy and well-recorded, but also poetic and progressive in feel and subject matter. The band were suddenly being tapped for every notable hardcore fest in the U.S., receiving the crowd reactions to warrant it, and finding themselves on tours supporting major acts like Have Heart, Turnstile, Knuckle Puck, and Defeater.

Come February 2020, One Step Closer managed to raise eyebrows further with an invigorating promo single. And then, of course…the rest of 2020 happened. Lockdowns halted the momentum of every musician, and that alone might have been enough to put the band in a slump if not for their determination to finish writing This Place You Know. But on top of the world’s circumstances, the band struggled with different personal issues that fueled their emotions for the record – relationships deteriorating, loss of family and depression all made this time more difficult. With the touring industry completely shut down and no escape possible from this trauma, it was looking quite dark before any potential dawn. “Everything’s good and fine and you feel good being at home,” Savitski explains, “until you lose those aspects of home that you really…” He momentarily trails off. “This place just doesn’t feel the same anymore, you know?”

That’s the pervasive notion that haunts This Place You Know, a passionate and intense memorial for an especially difficult year. “We grew drastically,” Savtiski beams, and he’s not wrong. One Step Closer expanded their sound considerably, experimenting with unexpected textures, harmonies, and atmospheres, all while remaining true to their hardcore backbone. “Everyone put themselves into this record. No one held anyone back. If there was an idea that could be cool, then we’d try it.”

The songs on This Place You Know simply exude energy, with One Step Closer harnessing the most dynamic, compelling, and memorable elements of their influences from hardcore and beyond. “Pringle Street” rings with the dissonance, urgency, and melody of their Kingston, Pennsylvania neighbors and heroes, Title Fight; “Hereafter” is a true ballad with wistful singing and a piano-based coda; and “Leave Me Behind” unravels with relatable helplessness and desperation. The band also prove their crate-digging, record store clerk cred with guitarists Allen and Thompson using their impossibly despondent-sounding chords to subtly reference a gamut of obscure and cult classic emo inspirations like Flagman, Braid, and On the Might of Princes.

With life in the world beginning anew, hopefully “home” is ready to let One Step Closer go, but on much better terms. “From touring so much [those] past two years,” Savitski notes, “I was home but always ready to be leaving for the next event. I never had to sit and deal with… ‘Wow, I am just kind of stuck here and waiting.’” His traumatic experiences “made it come full circle where I was just like, ’Yeah, I need to leave.’ I just wanna get out and go do something and be somewhere else right now.” Now that the opportunity is there, expect One Step Closer to relish the moment as anticipated in “Home for the Night”: “I’m never coming home / don’t try to keep me this time.”

An essay by Pat Flynn (Have Heart, Fiddlehead):

What is One Step Closer?

In 1854, Thoreau asserted that most of us lead lives of quiet desperation, shielding our common sorrows in favor of a brittle veneer of stability, a lie that shatters us all in the shadows of a self-made shade of fearing what the world may find when we finally step closer into the light.

From Walden to Wilkes-Barre, that 19th century sense of desperation to be seen just as one truly is, carries into our 21st century, – but unquiet and in the sound of a fury that is literally One Step Closer, – closer to obliterating the shackles of our shadows, closer to the light shining on our souls – showcasing our universal and human nature to love, loathe, and long for something more.

In 2016, and in the midst of the winding wilderness that is adolescence, the hearts and minds that world would know as One Step Closer (Ryan Savitski, Tommy Norton, Ross Thompson, Brian Talipan and Grady Allen) took to the task of telling the world of the universal truths that could be found in the dim, dank depths of Wilkes-Barre, Pennsylvania with the same liberated love for living a full and examined life which Thoreau wrote of before the dramatic wilderness of Walden, yet to the sonics of a revived and reimagined Turning Point that left listeners with a sense of refreshing originality.

From PA to CA, One Step Closer scrawled in the halls of America’s hardcore their questions of truth, love, morality, evolution and human freedom, setting the darkness surrounding the togetherness of our species right to fire. And yet, out of five years of reaching for the relationship from the impossibly-distant, yet infinitely-close proverbial me and you comes assertions. Assertions stemming from the dullness of Wilkes-Barre, from the philosophizing of our fears, from our desperation to dare and not dream, from this place you know that sits at the core of our being and commands: no matter the sorrow or shame, we are all called to step into the light of truth, so move closer and quiet no more.

In short, One Step Closer is a source and force of seeking the freedom to be as you are and dream to be.