UK tour dates in May 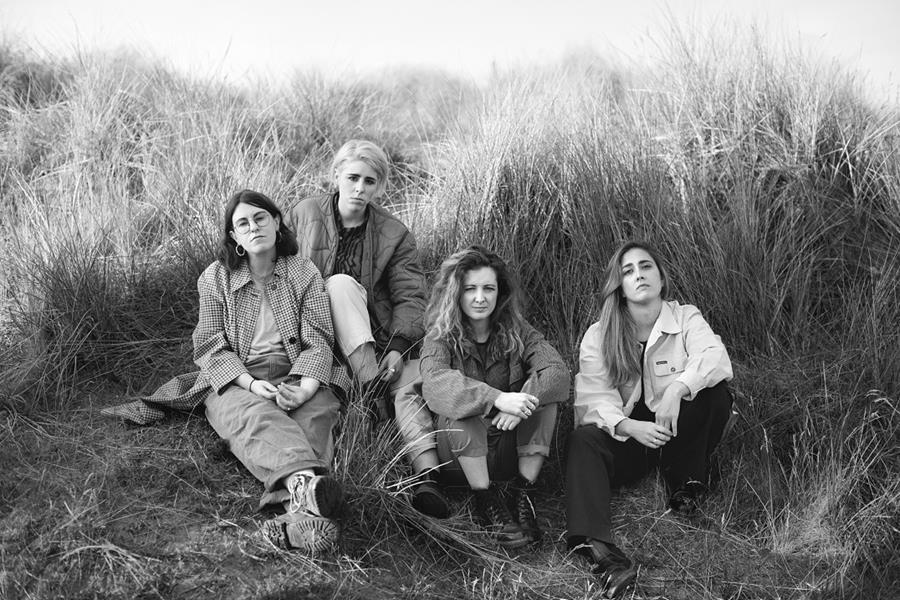 Last month Dublin’s Pillow Queens announced their sophomore album Leave The Light On, their first release on Royal Mountain Records (Wild Pink, Alvvays, US Girls), which is due out on April 1st. The band have been building serious momentum since the release of their 2017 debut EP Calm Girls – selling out shows in their native Ireland, supporting artists like IDLES, Pussy Riot and Future Islands, and earning enthusiastic support in the UK before independently releasing their 2020 debut LP In Waiting. The album was a major breakthrough for the band, and a sleeper hit amongst music fans, scoring praise across US, UK and Irish media – notably from The Guardian who called them “2020’s most exciting indie-rockers”, along with multiple A-list spots on the BBC 6 Music playlist –  a RTÉ Choice Music Prize nomination for Irish Album Of The Year, and perhaps most remarkably of all a US national television appearance on The Late Late Show with James Corden.

Today, the band are sharing the second single from the new record, a track called “Hearts & Minds” that singer/guitarist Pamela Connolly describes as capturing the reoccurrence of teenage insecurities occasioned by the band’s rise to prominence and the imposter syndrome she experienced as a result.

“‘Hearts & Minds’ is about experiencing the feeling of being a teenager again,” explains Connolly. “The insecurities about body image and ability when it comes to being a musician that’s seeing themselves recorded and pictured, as well as commented on. It deals with the idea of imposter syndrome when it comes to an industry that favours the male form and the insecurity of not being able to be effortless with your movements.”

Watch the video for “Hearts & Minds” below.

In support of the album the band will play a sold-out run of shows in Ireland, followed by their first ever US tour dates (including SXSW), as well as their biggest ever UK tour dates in May.

Full live routing can be found below, with tickets available here. 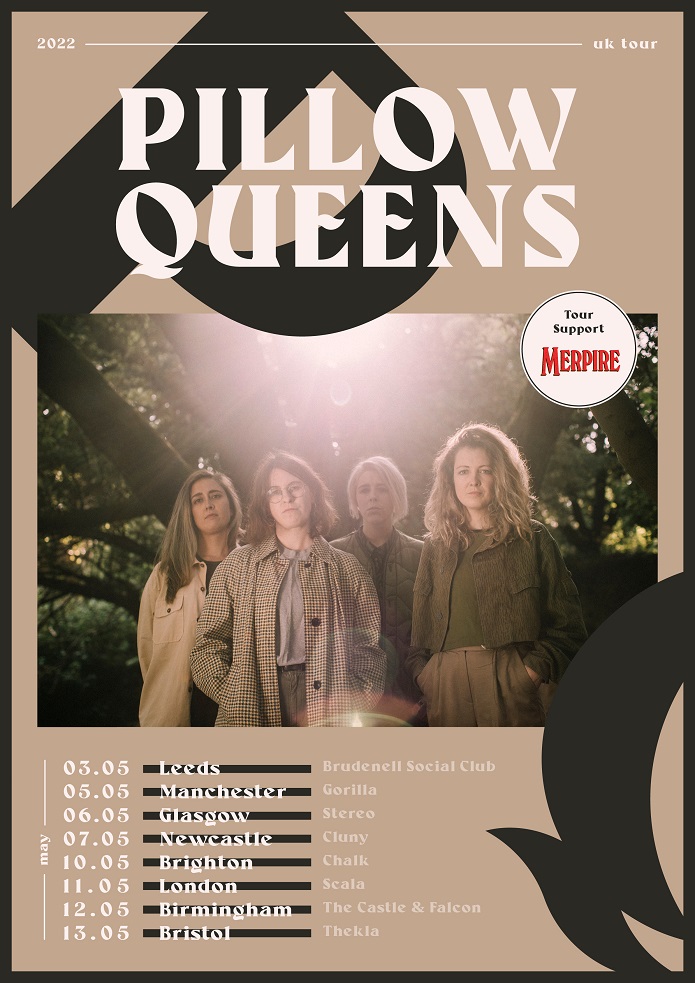 More about Pillow Queens’ new album Leave The Light On

When Pillow Queens set about recording their second album, before, after and during, great spaces were opening. The pauses in living and connection were profound. And so, they went two places: within, and towards each other.

Leave The Light On is an exploration of the uncertainty of emotions as they are in process, and an intuitive outpouring of ideas as they form. It’s about being intimately honest with yourself, and as a band. It’s about trusting that this state of vulnerability can be held as it emerges, by you, by us.

What do queer dream blues sound like? More importantly, what do they feel like? Leaving home at night, driving through the black back roads until the tungsten light starts to glow. “Uaigneas an chaldaigh”, the Irish sense of loneliness experienced on the shore. The confusion and discombobulation of waking and feeling unfamiliar. The liminal space between dreaming and being conscious. The unmooring that happens when a sense of self is being explored and sometimes slipping away.

But gravitating towards the unknown and the ambiguous can often yield the kinds of sounds and feelings that provide creative certainty, where the art is coming to you, as much as you going to it. Leave The Light On fills vast new sonic plains for Pillow Queens. It’s an album that encourages duality; to be soft and hard, delicate, and muscular, intimate and anthemic, alone and together. Collaborating on lyrics, a shared emotional experience fills these songs of hope and home, insecurity and estrangement, songs that track time passing and a sense of reflection grows deeper every day.

When real movement is stillness, when to be stationary feels transitionary, and when the most vital journey in life is to go within, then it’s time to leave the light on, and open up.

Leave The Light On is due out April 1st on Royal Mountain Records. 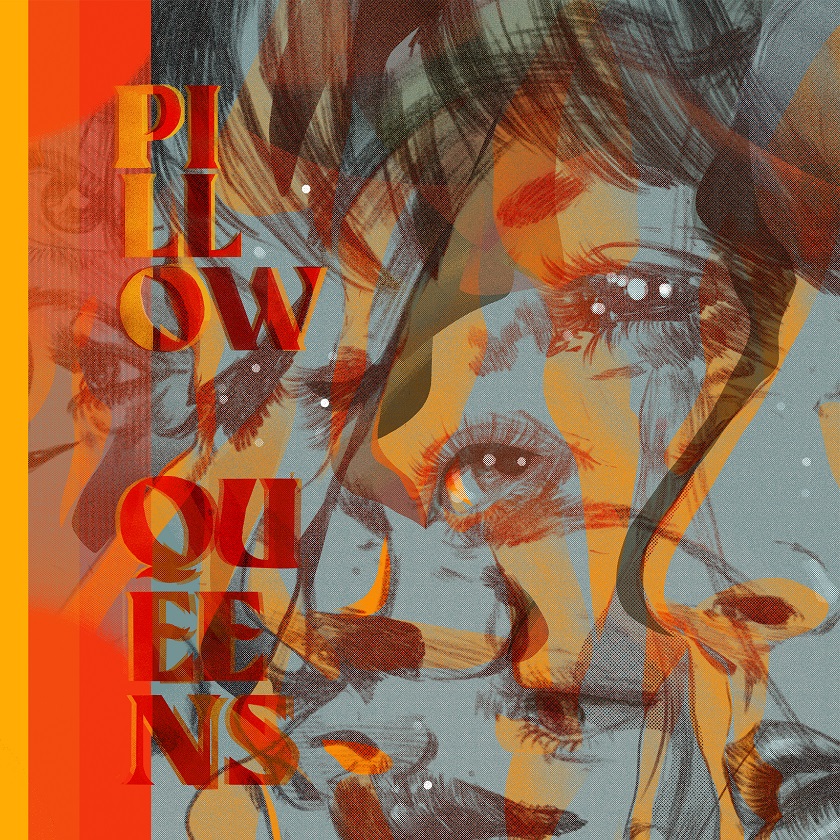 Praise for debut album In Waiting

Featured as Album Of The Day – BBC 6 Music
Irish Album Of The Year 2020 nomination – RTÉ Choice Music Prize
“Phenomenal” – Clash
“In Waiting arrives with a refreshing and much-needed assertiveness” – DIY
????? – Dork
“Pillow Queens know how to pull at your heartstrings.” – The FADER
“A powerhouse of indie rock” – The Forty-Five
“a totally addictive treat” – Gig Wise
“2020’s most exciting indie-rockers” – The Guardian
“superb vocal performances.” – The Independent
“Snarling lyrics with smooth harmonies” – The i Paper
“Song of The Day” (Handsome Wife) – KEXP
“A total knockout force to win anyone over.” – The Line of Best Fit
“Pretty much every Pillow Queens song feels like a world-beater.” – NME
“Queer punk and pop songs with sharp, anxious edges” – NPR
“It’s an album built on big hooks and aching hearts” – Paste
“Nothing short of remarkable.” – Upset

Binker and Moses share new single "After The Machine Settles"