The brand new Renault Clio has had much hype surrounding it, mainly by Renault themselves. With such lines on the brochure as “The Anatomy of Desire” it has a lot to live up to. We drove the new Clio in its Dynamique MediaNav spec which is one below the range topper. At £16,725 it only had a 1.4 Diesel engine making 90BHP. 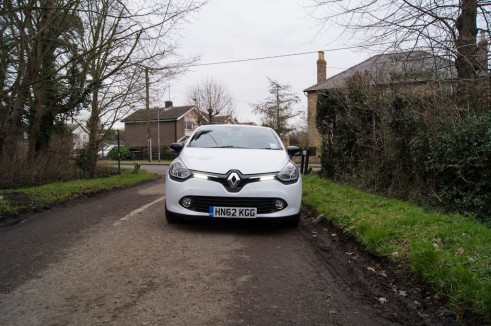 This Clio has grown since the last one, it’s longer, wider but lower than the outgoing model. To me it looks a little too big, the hidden fifth door is a great feature and it does make the car look sportier, but it still looks huge compared to the old Clio. 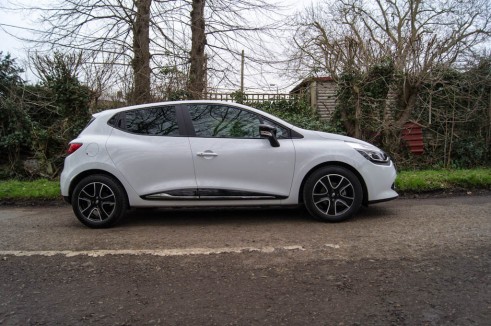 From the front the car looks amazing, the large headlights look as though they are being pulled together by the gloss black grille. In the middle of the grille sits the oversized Renault badge with “Clio” discretely below it. Moving down the car the doors pin in slightly toward the bottom, whilst bulges are found over the rear wheels giving the car a more poised, athletic look. At the very back there is another massive Renault badge (you really won’t mistake this car!). Finally there is a deep gloss black rear diffuser which finishes the back end off nicely. 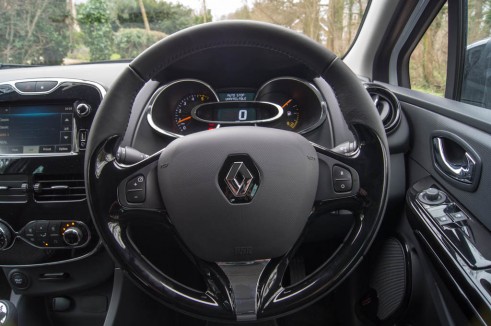 Now with only 90BHP, and it being a 1.4 Diesel I didn’t hold out a lot of hope…..I was quite wrong! It’s not fast, but it is surprisingly spritely. This engine will achieve 0-60 in 11.7 seconds, but it never felt that long when I was driving it. Around the country lanes it was easily fast enough to have some fun in, and when taken on dual carriageways it had enough oomph to overtake the dawdlers. That being said though, this engine is THE quickest you can currently buy. The slowest in the range is the 1.2 16v Petrol, with a 0-60 time of 15.4 seconds. Not exactly an exciting line up of choices for your launch range. Saviour will come later on in the year when Renault release the Dual Clutch TCe 120BHP engine, this will be part of the GT Line spec. Renault have put a faster steering rack in this Clio, it now takes just 2.71 turns to go from lock-to-lock. It makes the steering feel very connected, but I’m not sure that was a good idea in such a big car as it makes you notice the weight, and size a lot more. I can’t help feel the steering is just too quick. It would be fine on the RenaultSport models, but on an everyday car I don’t think it’s needed. On the plus side the ride is smooth I didn’t find it bouncy at all, and road noise is minimal thanks to the chunky tyres. 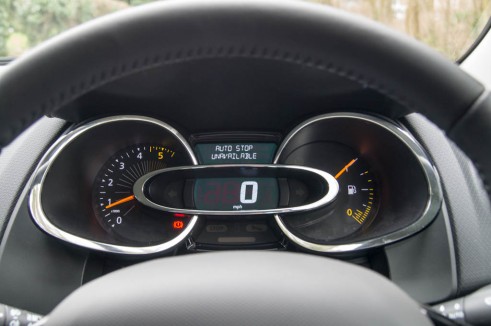 Inside the Clio is pleasant, the dash dials are laid out rather funky, they are clear and modern with a digital speedo. Inside our higher spec Dynamique there was swathes of gloss black trim. It looks nice but you will forever be removing fingerprints, and greasy hand marks from it; hopefully its hard wearing and wont scratch easily. Some of the plastics around the passenger side look a little cheap, they could have been textured better. 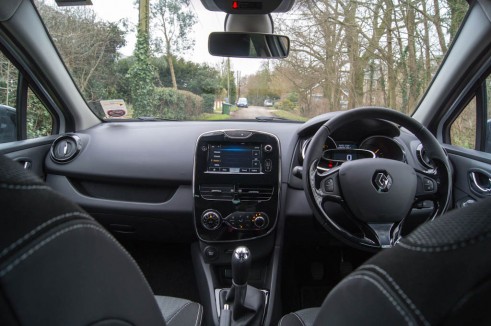 The touch screen worked well, and was a lot more responsive than the one found in the Peugeot 208, menus where easier to navigate your way around too. Sound was good, there was real true bass which is always nice. This is thanks to Renault’s new Bass Reflex technology that is built into the front speakers. Boot space is ample at 300 litres, a low load height makes it easy to get things in and out. 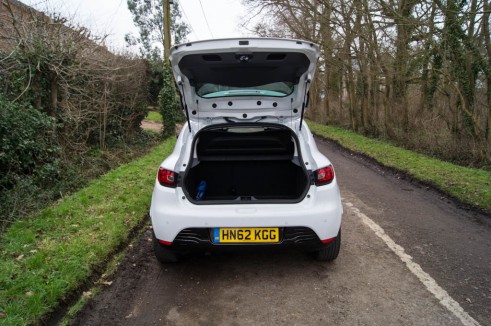 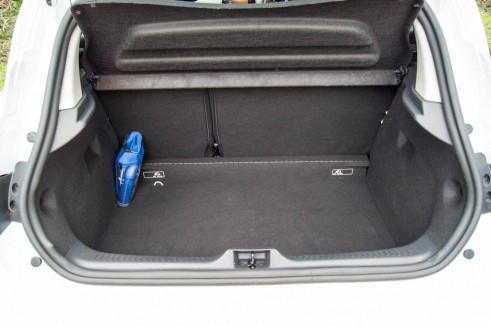 There is a slight issue with the interior though…..and you will notice this as soon as you get in the Clio. The start/stop button is on the other side of the centre console, so you have to reach across, in front of the gearstick to start the car. The oddities don’t stop there, when you look at the dash from head on you can see the whole centre console sweeps to the left. The lower dash trim even cuts away on the left hand side so you can access the console easier. Its clearly aimed towards a left hand drivers position. None of it has been redesigned for the right hand drive market, the more you look at it the odder it all looks. I can’t believe Renault would have done this, if you knew you weren’t going to redesign it for the right hand drive market, go back to the drawing board and make it so it works for both left and right hand drive models. Try harder next time Renault! 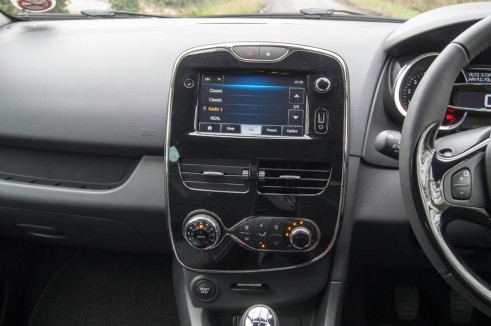 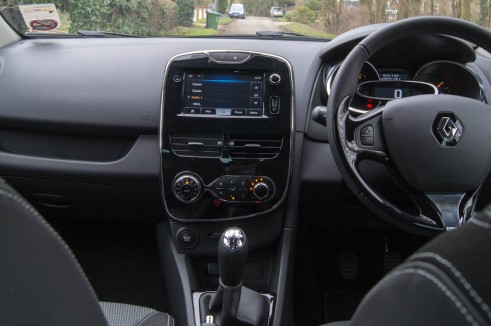 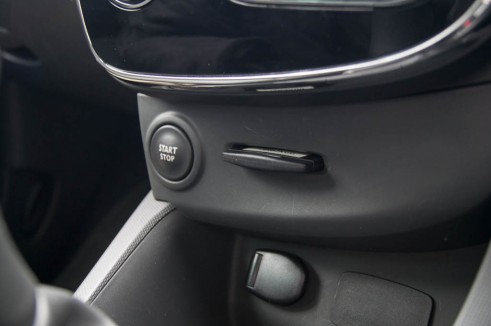 I really wanted to like this car as it looks stunning! Yes it’s big but I could forgive that if it handled like a light nimble hatchback, but it doesn’t. The interior looks great from most angles, but the way it’s focussed to the left just looks wrong. Of the current engines available I would go for the dCi 90 that we tested here, it has more grunt over the 3 cylinder Petrol TCe90 (which we also drove) and feels more refined at higher speeds. If they had made this in a slightly smaller, three door format as well as this 5 door, I think they would have a winner on their hands.

© – All images Copyright of carwitter.com – Straightforward, to the point, car news, car reviews and motoring events. Bringing you all you need to know, without the extra padding!

Why you should buy a hatchback as your first car

Why You Should Get A Van Instead Of A Car