DEBUT ALBUM “WHEN I HAVE FEARS” OUT THIS FRIDAY, 16TH AUGUST ON HUMAN SEASON RECORDS 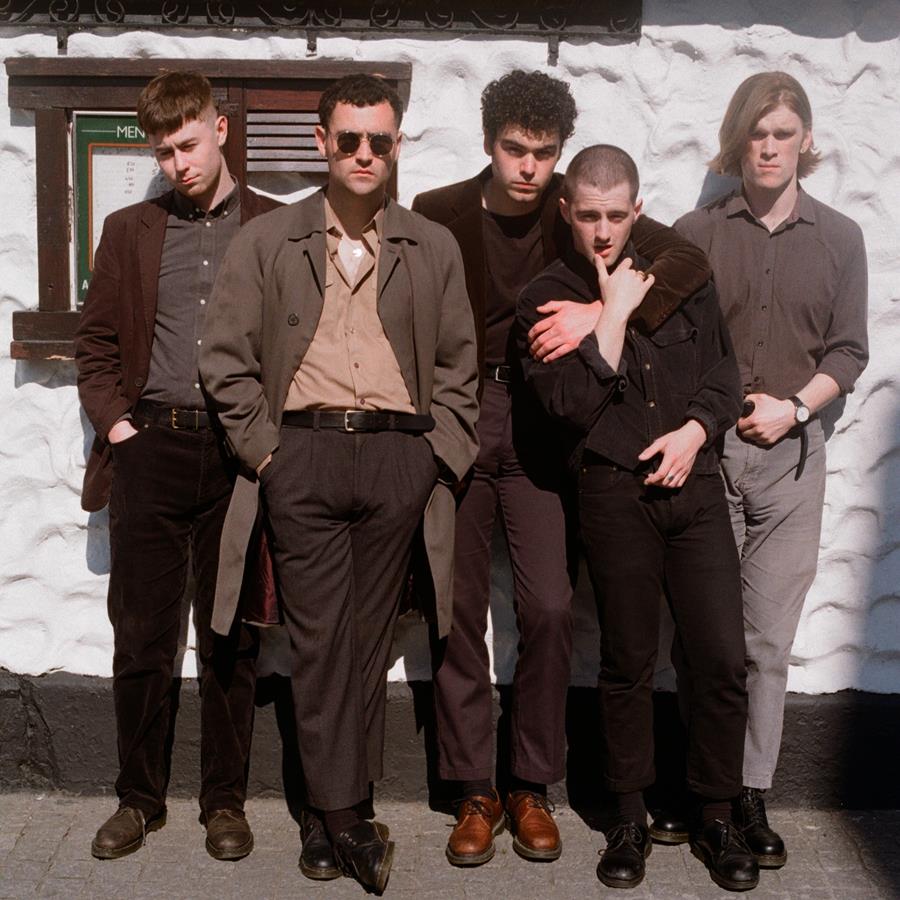 Ahead of the release of their debut album this Friday, Dublin’s The Murder Capital have shared a new recording entitled ‘More Is Less’, the live version of which went viral and forged the band’s breakthrough last year.

The release follows the recent live session for Steve Lamacq on 6 Music, where they have been B-listed for latest release “Don’t Cling To Life”, that you can listen to again HERE

The band have also recently released the first in a series of four live videos, starting with ‘Green & Blue’, which you can watch HERE

The Murder Capital have seen previous single releases – “Feeling Fades” and the 12″ of the aforementioned “Green & Blue” – top the vinyl charts already this year, and last month announced a series of strictly limited in-stores and intimate performances for later this week: 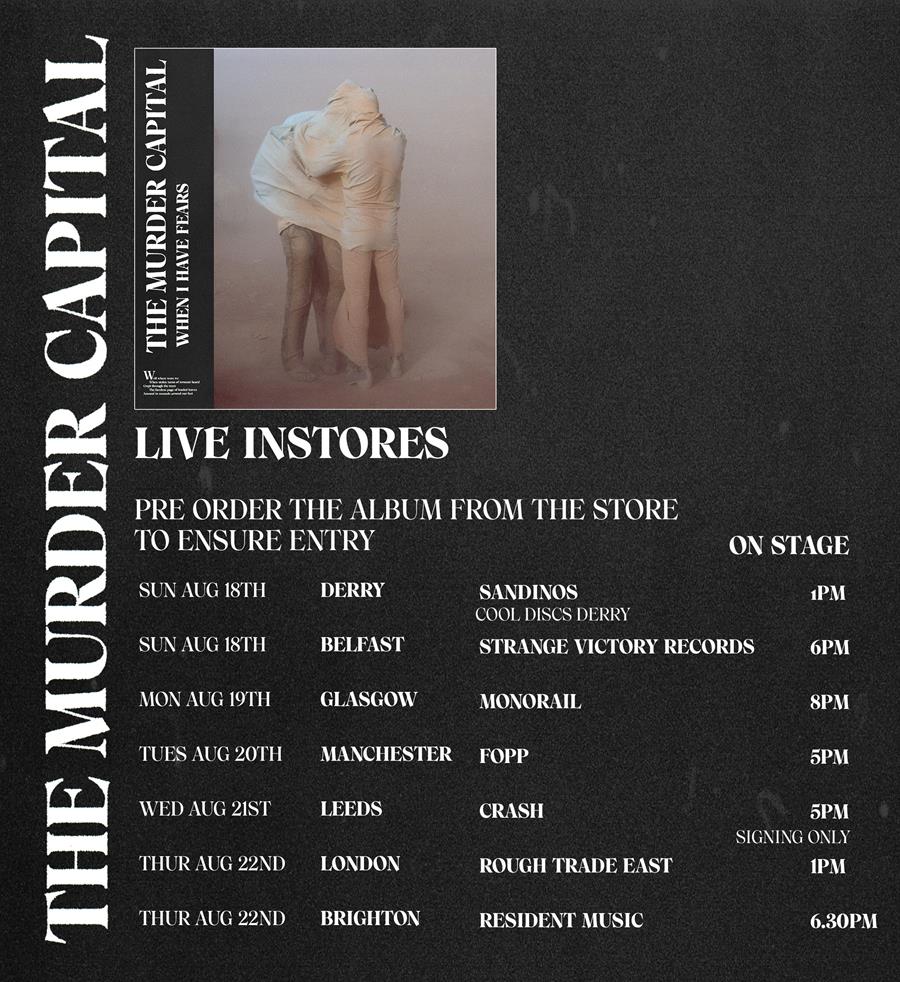 The signings and in-stores are in support of their much-anticipated debut album, “When I Have Fears”, set for release on August 16th through Human Season Records.

You can pre-order HERE

An exercise in both darkness and light, “When I Have Fears” only serves to highlight the early ambition in the band’s sound. From the post-rock build and breakdowns of the two-part “Slowdance”, to the tender, bruised confessional of “On Twisted Ground” and industrial pulse of closer “Love, Love, Love”, there’s a consistent intensity throughout that marks out The Murder Capital as a band arriving fully formed on their debut album.

As well as festival dates across the summer, the band will head out on two headline tours – once in July and again in October / November.

Full dates below with tickets available from: www.themurdercapital.com

You can catch the band live on the following dates: 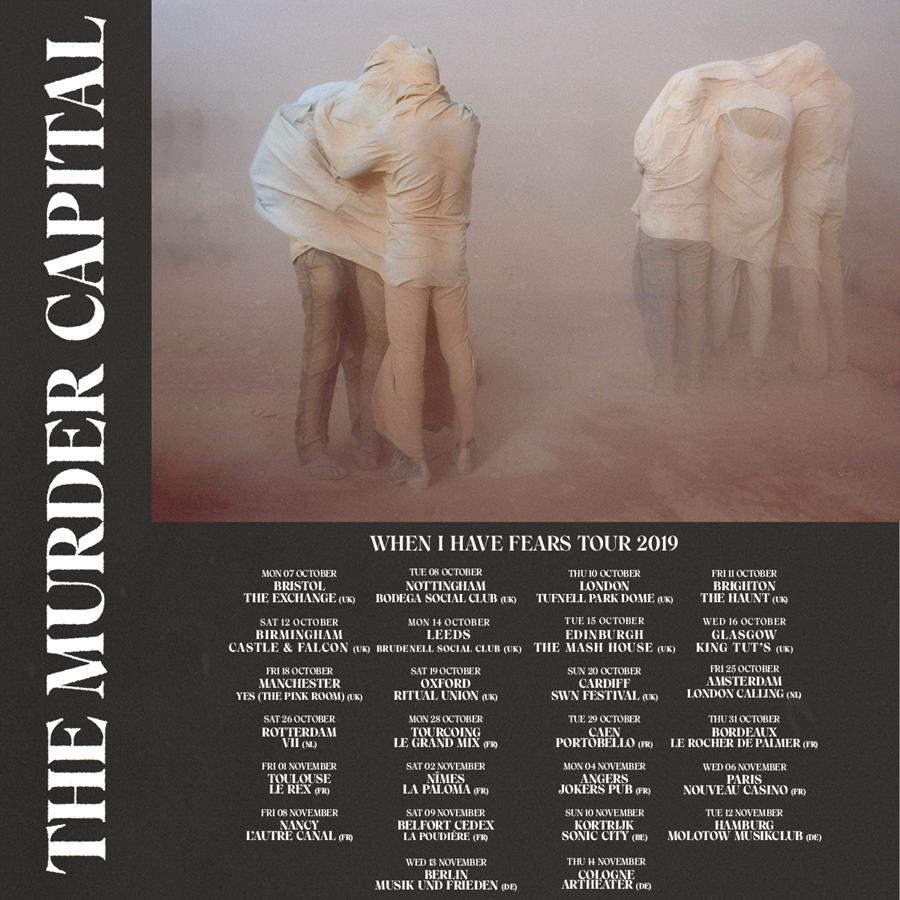 The Murder Capital are:

If you have ever seen The Murder Capital live then what will strike you most about the experience is not the heaviness, the bleakness or the rage you might expect, but witnessing a most extreme vision of tenderness. Their debut album, ‘When I Have Fears’, recorded over the Spring with Flood (PJ Harvey, Nick Cave & The Bad Seeds, New Order etc.), embodies this tenderness; it is a purple bruise on the hard knee of the so-called post-punk resurgence. It is not a labour of love but a struggle through love, loneliness and grief that now sits weightless upon their five shoulders, not marching, but dancing, out into the cold light of day. It exists in two worlds which oppose each other yet breath each other’s air, because ultimately it is an album about accepting that which you fear, loving that which you hate, feeling the excess that can only be found in isolation. The name, ‘When I Have Fears’ acknowledges its own vulnerability, and was given very early on to ensure that consistency of thought, and that beautiful arch in the narrative which gives space for the purging of guilt and leads, ultimately, to its final cathartic moments.

Listening to how many places opening track For Everything reaches sonically within the first ten seconds is representative of the album’s attempt to touch upon “the whole spectrum of human emotion”. The guitars, like saws, sing to each other, tenor and baritone; a chiming tambourine compliments even the methodical and angry deep-set drums. ‘Not at all, not for everything,/ It’s not for everything at all./ Not for everyone, it’s not for anyone at all,’ is so much more than just a smart, slick trick of the tongue, because the poetic and sonic landscape of which it speaks, and that which the whole album speaks, is both a mountain and a valley – it really becomes both everything and nothing.

The music was secondary, and the ethos of compassion and ability to fully understand one another always came first. “The last time we played through the album we felt every second of those 6 months spent writing it and a lot of it is a reflection of what we went through together.” Just to hear Feeling Fades, to glimpse it, you immediately understand The Murder Capital’s insatiable need for unity and empathy both to banish and beautify the crux of loneliness. We hear that isolated voice searching out to sea, ‘And as the feeling fades away/ The tearing streets create a wave’: it lurches forward with uncertainty over the resounding bass that creeps slowly, slowly, and eventually catches up with a crack of those chugging drums. And suddenly we have union, we are there running alongside that voice, hand in hand. And, as everything falls in time and into place, we become acutely aware of the present, and that present which the voice sings of, ‘the now elapsed round you and me’, is no longer a lonely existence.

You might be surprised to know that the debut album from that dark, twisted Dublin quintet, The Murder Capital, is in all its boyish innocence and vulnerability, a coming of age album. “When you get to your teens you begin to feel like you’re playing catch up with your inner child. You have to dismantle all the shit that was put into your parents brains and given to you.” A generational baggage handed to us perhaps not consciously, but by virtue of blood and guilt, as explained in More Is Less: ‘If I gave you what you wanted/ you’d never be full./ That’s the trappings of your boyish mind/ Become unshakeable”. Something as small as questioning why at six years old your hands were clasped in prayer, becomes a quiet revolution, “and we’ve tried to dismantle it in the fact that we’ve been completely honest in attempting to dismantle ourselves.”

It is an attempt to hold a mirror up to emotion, to pain, which for this group is quite a specific pain; an unequivocal suffering as sharp as a shard of this reflective glass. But by focusing in on this struggle it comes undone, unanchored, deconstructed- but never diluted. It is simply allowed to float freely within the soundscape, where it may become transformed as another harnesses it. The same, but different- it is the cracked mirror. ‘Came home from somewhere,/ Somehow covered in myself./ Came home from nowhere,/ ‘Somehow now I’m someone else’ sings Slowdance I, with its intense reverb, drone-like bass and stinging atonal guitar. Its murky, anonymous and unsure compared to the elation of Slowdance II, and even though the tracks bleed into each other, you can sense it emerging from the pain, reborn as the cello sings and we enter the second half of the record.

This relationship between pain and freedom is an important one. The suicide of a close friend led not only to the birth of the band’s name but to the philosophy of the entire record, “every single one of those lyrics relates back in some way to his death”. Discovering the work of photographer Francesca Woodman who took her own life at 22, was also a significant touch point. “The biggest impression her work left on us was relating to the loneliness of her photos. That sense of being completely on your own, but also taking solace in the beauty of the work as well. I think we’d be lying if we ever truly admitted to ourselves that we weren’t afraid of dying young. I think we push the boundaries at times. There’s something about Francesca Woodman’s work that just takes control of that.” Listening to Green and Blue, a track written immediately after discovering her work, you can hear that isolation as each instrument seems to exist entirely in a world of it’s own- so self aware. Lyrically too, its completely subjective. It’s a song that can see only out of your eyes, it blurs the background and draws a thick black outline around the iris, gothic and indulgent.

If this work inspires within us a sense of self-reflection and confrontation, then the album too came to realise itself, and in the most poignant way possible. One member buried his mum half way through recording, and so was born the dark grooves and tragic beauty of the record’s bravest track, Don’t Cling To Life. “Even through everything that was going on we didn’t want to write a sad song, we wanted to write a song you could dance to. Feeling grief and wanting to dance through it, and feeling the rawness and emptiness of our own grief, because any relationship that involves love is so specific to you.” And this quiet but violent contemplation will eventually lead you to the sobered ecstasy that we hear in the anti-chorus of Love, Love, Love. The final track’s words are weighted with their own importance, they are sure, and the instrumentation is round and whole and warm with the friction of the constant flitting snare, beating like a human heart. Love, fear, hate, grief: it is not the fact of these experiences but their uniqueness, that makes them universal. It is the knowledge that no one else is feeling how you feel, and yet you all find yourselves huddled round that same small dignified fire in the corner of the room at your darkest, coldest moments.

When I Have Fears is not black and white, it is a unique experience that becomes universal simply through listening, tethered together by an unbreakable tenderness.

Not black and white, but three anonymous bodies, cloaked and embracing in a pallid, grey-beige.

It is everything and it is nothing.

Shared by everyone and no one. 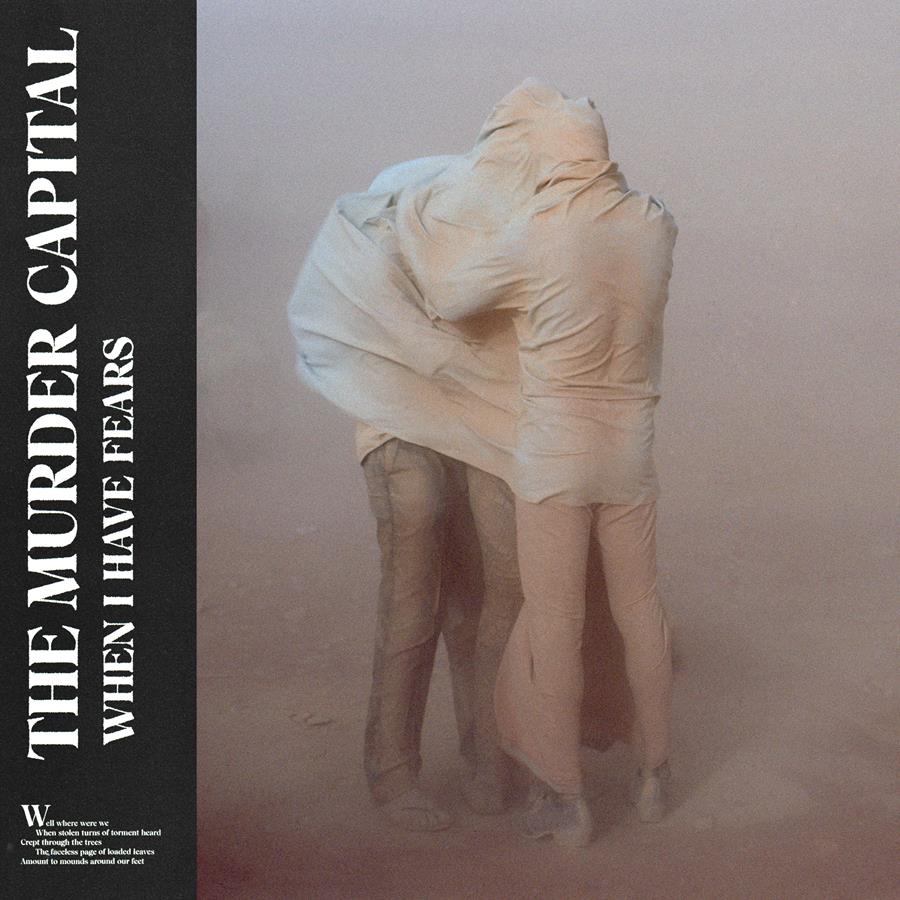 “The Murder Capital are more than a punk band, and in a league of their own.”
Loud & Quiet

“An album just waiting eagerly to be a classic.”
DIY

“One of the best debuts for some time.”
Uncut

“The Murder Capital are outrageously exciting live. The young Dublin quintet’s brutal art-punk rock is thrilling on the edge of terrifying: new year fireworks in a metal tent. They make the brutal beautiful.”
The Guardian

“The Murder Capital are one of those most oddly entertaining prospects – a punk band that can truly instill can’t-look-away levels of captivation.”
NME

“Cacophonous noise and stage theatrics that could make them stars very, very soon.”
DIY on Eurosonic

“The Murder Capital are as unstinting, honest and vicious as you’d expect the next great punk band torn from the streets of Dublin to be. They see the bar, clear it, and raise it dauntingly high.”
Discovery, The Line Of Best Fit

“The Murder Capital emit a passion that will turn heads, but importantly they are a voice with something to shout about, and that could truly cement them as something to cherish.”
So Young

“If you’re into your post-punk brutal and bolshy, The Murder Capital have got you sorted. The Murder Capital as one of those most oddly entertaining prospects – a punk band that can truly instil can’t-look-away levels of captivation.”
NME Hot 100 For 2019

“As with any new band, the question always comes down to whether they can be just as sharp and thrilling when it comes to studio recordings, and today The Murder Capital give us the definitive and unforgiving affirmative on their debut single”
Track Of The Day, The 405

“A group whose live shows and sessions have (rightly) been garnering much attention… the soundtrack to your Friday night.”
Wonderland

“Surging like waves and creating the same nervous, edge-of-your-seat atmosphere that their live shows have been so well spoken of for… beautiful chaos.”
NEU Pick Of The Day, DIY

“A brooding beat and a menacing bassline, The Murder Capital have delivered the goods.”
Gigwise

“Not just a band primed to rip your head off, but to make you throw shapes.”
Dork Hype 2019

“Furious, bellowing Irish punks who would beat you in a staring contest.”
DIY Class Of 2019

Nine Ways To Avoid Being Conned At The Car Dealer

4 Money Tips That You Need To Remember