“Sheer audaciousness and creativity..  It’s much unlike anything else you’re likely to hear from a very broadly defined pop realm”
– Something Else!

“His record packs the kind of acerbic, off-kilter Tom Zé-Elza Soares buzz that delivers samba and its children from suave” – Noisey

Rio de Janeiro-based multi-instrumentalist and producer Thiago Nassif today announced his new full-length Mente will be released on July 3rd via Gearbox Records. The album was co-produced by No Wave legend Arto Lindsay (DNA, Lounge Lizards) who also plays guitar on the album’s lead video/single “Soar Estranho,” which is out now.

Sung part in Portguese and part in English, “Soar Estranho” is an irrepressible slice of quirky, hook-laden, yet tropically laid-back Brazilian magic that sounds like Berlin-period-Bowie at his most radio friendly.

Named the album after the Portuguese word mente, which means “mind” and also “to lie,” Nassif explains: “I chose this name mainly because Portuguese is the only language that connects these two semantic possibilities: thinking and lying. And also because now we are living this post-truth political era, where Brazil is at the top of the charts in these matters right now.”

Thiago Nassif gathers part of Rio de Janeiro’s younger generation of talents, many of whom have collaborated with and take influence from the likes of Caetano Veloso, João Donato and Ava Rocha, and who now appear on his latest project. Featured on the first single “Soar Estranho” are progressive musicians Vinicius Cantuária (O Terço, Bill Frisell, John Zorn) on drums and Ricardo Dias Gomes (Kill Shaman, Caetano Veloso) on Minimoog. See the full album credits HERE.

Mente will be available on vinyl, CD and across all digital platforms. A tour of the US, as well as dates at Cafe Oto (London) on July 2nd and in various cities across Europe are planned to support the release.

Thiago Nassif is a Brazilian musician, composer and producer based in Rio de Janeiro, whose impactful melange of pop, jarring no-wave, and tropicália has slowly been turning heads the world over.

In 2009, he released his first album “Garconnière”, produced by Rubens E. Santo and built around audio collages. It was at this point that he became active within Sao Paulo’s independent music scene, improvising in clubs, galleries, and art installations, exploring and investigating the visual aspects of sounds and the visual sensations that sounds generate. In 2011, Thiago produced and released his second album “Práxis”, a Greek word that means ‘learning from experimenting’. For this record, he gathered a supporting cast of musicians, painters, sculptors and architects, who each brought their own perspectives and techniques to the record.

In 2015, Thiago moved to Rio to record his third album and met no wave icon Arto Lindsay. At the time, Rio’s burgeoning musical scene was fuelled by an interdisciplinary approach which mixed together music, visual arts, poetry, and cinema. Caetano Veloso was collaborating with a group of young musicians of Nassif’s generation, forming Banda Cê, Ava Rocha was releasing her second, masterful album “Ava Patrya Yndia Yracema”, and other innovative work was being made by the likes of Meia Banda, Jonas Sá, and Chelpa Ferro. In Nassif’s words, “Something was happening and we were all feeling it.”

His third album, called “Três” and co-produced by no wave icon Arto Lindsay, was released in 2016 in Brazil, and re-released in 2018 via British label Foom (Peter Zummo, Micachu, Oliver Coates) to critical acclaim. Inspired by artists such as Tom Zé, Ricardo Villalobos, Alva Noto, and James Chance, the album features contributions from some of Brazil’s most exciting, new generational talents that Nassif met in Rio, such as experimental singer-songwriter Negro Leo and Domenico Lancelloti, (collaborator of Moreno Veloso, and former Gal Costa band member). The album received the seal of approval from the ‘Dean of American Rock Critics,’ Robert Christgau and was heavily played on BBC 3’s Late Junction, with Thiago appearing on the show as a guest in July 2018.

Following on from this, Thiago Nassif co-produced Arto Lindsay’s recent “Cuidado Madame” album and recorded his follow-up album called “Mente” or in English, “Mind”. The record will be released Juli of this year by British label Gearbox Records. Again, with Arto Lindsay as co-producer, Thiago goes deeper into his influences of no-wave, electronic music, Tropicalismo, jazz and rock. The album moves between contemporary Brazilian music to noise: from funk carioca to dystopian, distorted bossa nova. Mixing together the languages of Portuguese and English, the album shows the process of Thiago’s mind on transforming thoughts into products, music, color, and lacquer. “As vezes Plástico as vezes Pele”, meaning sometimes plastic sometimes skin. From the most profound to the shallow, the mind works as catalyst and a translator. 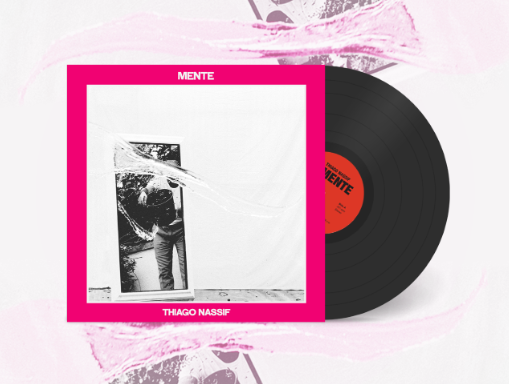